We had our Celebrate Yorktown Committee meeting today, and I thought I would mention a few upcoming events in Yorktown.
One of the best events in Yorktown will be this coming Saturday night with the concert by the Virginia Symphony that we put on for free for the public every Labor Day weekend. The concert is held outside with the Yorktown Victory Monument as an impressive backdrop. This is an event that all of us in town enjoy every year. The Celebrate Yorktown Committee raises the over $25,000 needed each year to put on this wonderful concert. There's judging of picnics, a concert by our York Town Fifes and Drums, and some venders as well.
The Yorktown Wine Festival is scheduled for October 4 down on the Rierwalk Landing. The time is 11 am - 6 pm. There's also a wine dinner at Nick's Riverwalk Restaurant. Tickets are available at http://www.villageevents.org/.
Our final "Shagging on the Riverwalk" ended a week ago--but there's another event called "Rhythms on the Riverwalk" on Fridays in September and the first Friday in October--6:30 - 8:30 pm. We are all hoping that this event won't be quite as popular as "Shagging" was! We can all understand why people enjoyed a free event, with the beautiful York River in the background, and a lot of nice people enjoying themselves!

We got word on the news this morning that the fires in the Great Dismal Swamp were finally under control--with about 15 firefighters still involved--down from 250 at the worst time of the fires. There's been no smoke around here from the fires since June--but there's still fire there--awaiting a tropical storm or hurricane to dump enough water on the area to douse them for good.
The Yorktown onions were all recently mowed down after the seeds matured and were disbursing themselves. The National Park Service preserves the onions as long as they can despite the ragged look of the areas where they are saved. Some people even complain to the NPS that they are not taking care of their property! And it's hard to explain to visitors that these plants are protected by law and cannot be cut down before going to seed. Almost everybody in town has them growing in our yards because they naturalize without any problem. I had a picture of one just blooming earlier, and here is another picture taken along the Colonial Parkway with the York River in the background. 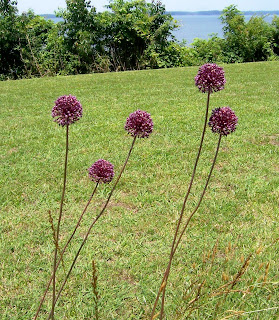 And here's a picture after the color has faded and the seeds have begun to mature. 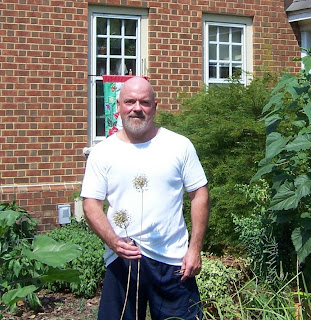 This is my lantana that keeps coming back year after year--this was taken the first week in July. 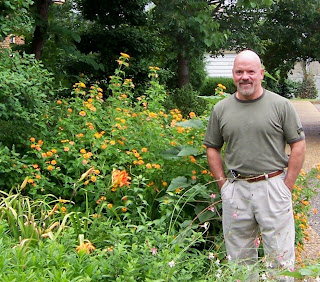 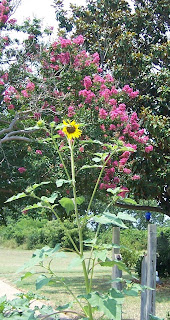 And here is a picture of my first sunflowers blooming about that same time. 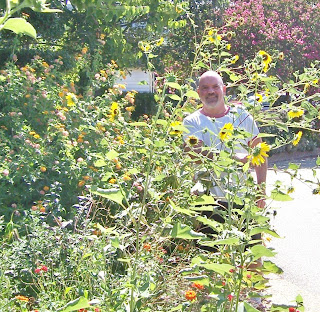 This is a quick picture I took this morning--showing how huge the lantana gets--and how enormous the sunflowers get by this time of the summer. The goldfinches love the sunflowers--they're so entertaining to watch--the beautiful birds bouncing around on the maturing seed heads.

And another picture of the sunflowers is here--those flowers are 8 or 9 feet high--and they spread out quite a bit. I let them get out of control almost--but I enjoy them so much: 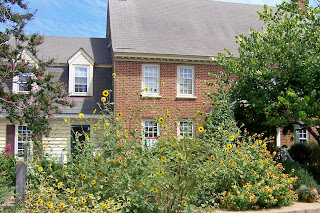 What a glorious July we had in Yorktown! Summer is hot and humid here--and ideal for the beach, for visiting shady battlefields, for strolling the tree-lined streets of Yorktown, and enjoying a nice view of the York River from a nice air-conditioned room! 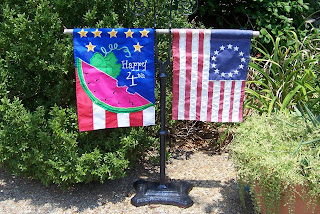 The York River Inn welcomes guests for an all-American holiday!

The 4th of July in Yorktown is such a treat! Old-fashioned--families--food--no traffic in town--patriotic parade--and fireworks!
One of my guests for three days was Drew Finley from just across the river in Gloucester. He and his wife decided staying here would give them easy access to all the activities in Yorktown and little of the hassle. He's retired from the Coast Guard and has a business called "Finley Photography." He takes pictures of weddings, family gatherings, individual portfolios, and lots of other opportunities when folks don't want to take the pictures themselves. He took a lot of pictures of our 4th of July events, and he agreed to let me share some of them with you! Thanks Drew! 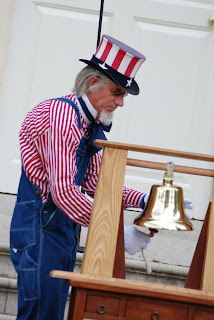 This is Yorktown's "Uncle Sam" ringing the bell from the now decommissioned USS Yorktown. Our "Celebrate Yorktown Committtee" which I started when I was director of the Watermen's Museum in Yorktown raised the money to have the stand constructed so that we could use the bell at special occasions 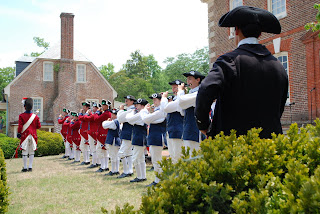 Our York Town fifes and drums playing in front of the Nelson House on Main Street. Nelson spent his entire fortune paying for the American Revolution and died owning no property and heavily in debt. Cornwallis used this house as his headquarters during part of the Siege of Yorktown. It's owned by and opened to the public by the National Park Service. 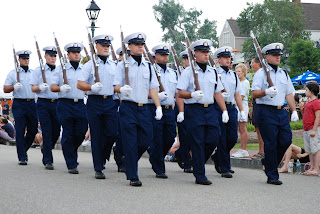 Our area has many military bases--the USCG Training Center is within sight of the beach; Ft. Eustis--US Army Transportation Center--is only 5 or 6 miles; US Naval Weapons Station-Yorktown is within sight up river--so our parades always feature many military marching groups, bands, or other participants. 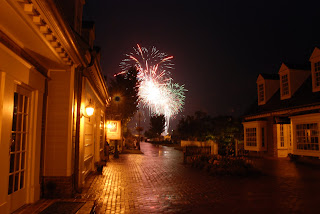 The fireworks exploding over the town and the York River are always spectacular!


Thanks again Drew for these great pictures! Drew can be contacted at http://www.photosbydrew.com/.

One dish I served on 4th of July was my red white and blue jello parfaits. The recipe is pretty long since it involves making three different colors of jello, each with additional ingredients--and you have to wait for a while between each layer for the previous layer to cool. But--here it is if you want to try it for yourself:

Red White and Blue jello
2 3 oz "berry blue" or blackberry jello
1 can blueberry pie filling
1 3 oz lemon jello
1 8 oz cream cheese softened
1 6 oz frozen whipped topping thawed
2 3 oz strawberry or cranberry jello
1 10 oz frozen strawberries
Take 12 parfait glasses (or large wine glasses), or 4 small loaf pans (3 ½ X 7 1 /2 x 2 1/4) or a large 13 x 9 casserole dish. For the loaf pans, spray them with Pam–then I line the loaf pans with plastic wrap––the Pam makes it stick nicely to the sides of the pan–have a little overlap on the outside all the way around. I spray the casserole dish with Pam too–if you cut it into squares, they'll come out easier. You don't have to spray the parfait glasses.
By the way, don't use the aluminum foil loaf pans--because they're somewhat flexible, when you put in the second or third layer of jelled filling, the top layer will ooze down into the earlier layer.
Make the blueberry jello with 3 cups water instead of 4–stir in pie filling (if the filling has been refrigerated, it helps to set the jello faster) until thoroughly mixed. Divide into the containers. There will be some leftover if you use the 12 parfaits. Keep a Pam-sprayed casserole dish nearby to put the extra in. And be careful putting the blue layer in so that you don't get any on the sides of the glasses.
Cool until firm.
Add 1 cup boiling water to lemon jello. Beat this into the cream cheese. Cool to room temperature and fold in whipped topping. Spread evenly over the blue layer–be careful not to get any of this on the sides of the small pans since it will appear white when the wrap is taken off. For the parfaits, I usually put this into a plastic bag, cut the corner, and pipe the white layer into the glasses to keep from getting the white layer on the sides of the glasses.
Cool until firm.
Make the red jello with 3 cups water instead of 4. Stir in frozen strawberries and mix well. Cool to room temperature and pour on the top.
Cook in refrgerator for 4 or 5 hours until firmly set.
I usually take the loaf pans and turn them upside down on a serving plate–the wrap peels off very smoothly. If I make it in the bigger size, I cut it into squares. I decorate the loaf and the parfaits by using some little American flags on toothpicks, or some red white and blue decorations I've picked up at a decorations or some other store.
Making this dish in this order gives you parfaits with red on the top, then white, and then blue on the bottom. The loaf pans will be blue on top, then white, and red on the bottom, so if you want the loaves to be red on the top--then reverse the order of the preparation.
For Yorktown Day, AMERICA'S INDEPENDENCE DAY, October 19---I usually have a house full of French people who come to help us celebrate the victory! Then, I make the dish in the opposite order---with blue on the top, then white, and red on the bottom since the French flag is the "blue, white, and red" rather than the American "red, white, and blue."