I had or saw some "visitors" here this morning! 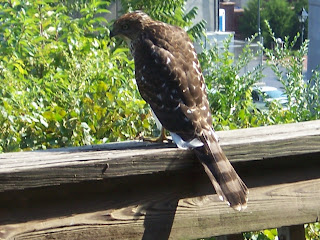 This bird--a sharp shinned hawk or a Cooper's hawk --decided to settle on my deck overlooking the river this morning. He/she sat in that same position for a couple of hours--just looking around. A friend in the biology department at William and Mary said the bird was checking out my bird feeders. He had no idea whether he/she would stay around or leave and never return. No matter, it was quite an experience to see this bird on the deck.

The other visitors have been in and out for the past couple of weeks--dolphins. They came in about a week ago-and there were dozens and dozens of them going upriver. I kept looking for them to come back, but I can't stand around all day looking out at the river! So--I don't know what happened to them. My guests were at the Riverwalk Restaurant last night and said they saw dolphins while they were having dinner.

Today, a couple of Navy ships came in at the time we were having breakfast--and the dolphins were playing in the wakes of the tugs that came in to support the ships. I took a lot of pictures--but you can't see anything but some waves. Maybe I'll get some pics to put on here at some point! They are so entertaining to watch.
Posted by York River Inn Blog at Monday, September 08, 2008