Following up on the smoke comments, we have not had even a whiff of smoke for the last week or more, although the fires are still smoldering. Parts of Norfolk, Suffolk, and Virginia Beach are still having problems. The fire fighters say that only a tropical storm that dumps a lot of water on the area over a short period of time will quench the embers that are still creating the smoke. In the 1930's a similar fire continued for three years! About 250 fire fighters from a number of states are working today.

This past weekend, the first of my native sunflowers bloomed! They look like big weeds until the flowers begin to appear, and then they continue with their display until frost. Not only are they pretty--with hundreds of flowers on each plant---7 or 8 feet tall--and 3 or 4 feet across--but the goldfinches love the seeds. They hang on the bouncing seed heads and eat to their heart's content--and they are so entertaining. 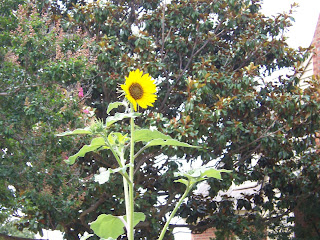 In the background of this picture, you can see the first blooms of the crape myrtles that are so beautiful here in the summer. Most people think that they're native, but they were imported to the US from China in the late 18th century. Now, they give us so much color during the hot summer--and they love it hot and humid--so they are very happy in Virginia! They don't grow as trees much farther north than Washington DC. I have five nice older ones of several different colors, and we've just planted several more. They're even pretty in the winter, because the bark sloughs off and the smooth trunk of the trees have beautiful patterns displayed as a result of the natural process. We call this the "100 day" tree, because they bloom for 100 days--and the bloom can be extended if you clip all the spent heads (but who's got time for that!!)

The other thing that's blooming in the yard now are the yuccas--the huge bouquets of white flowers are spectacular now and the spiky folilage gives an exotic appearance to the plant. 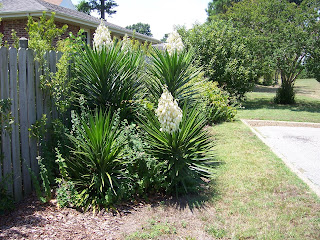